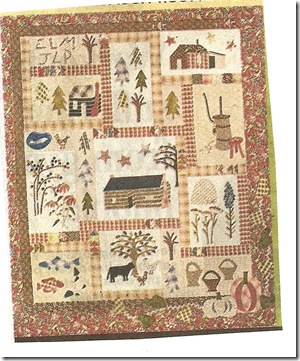 This morning’s paper brought a delightful surprise!   A folk-arty, primitive style of quilt for the annual block-of-the-month, Across the Wide Missouri.   And the bonus—it is a quilt reflecting life on the frontier!   What could be better?  It is a charming quilt with lots of history of my native state thrown in.   The first installment features a short story of Luzena Stanley Wilson whose husband had caught “gold fever” and packed up his family in 1849 to head west for Sacramento, California.  The treacherous trip took three months and Luzena discovered much more than gold…..

The designers of this wonderful quilt are Edie McGinnis and Jan Patek, two area favorites.   Here is the first very prim block, with the one on the left by Edie and the one on the right by Jan.

Looks like a good way to charge through "the winter that won’t quit" here in Kansas City!

Another great way to weather out the winter? 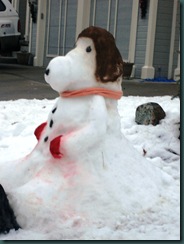 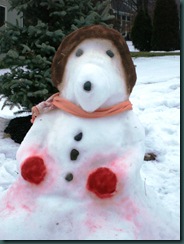 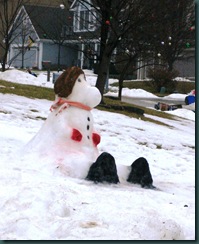 Build a snowman!!!!  Neighbors across the street constructed this amazing Snoopy Snowman in their front yard.   Isn’t he just the most darling snowman EVER??!!!   Love him!

Or-r-r,  there is still another way to fight the winter blahs around here: 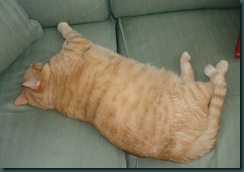 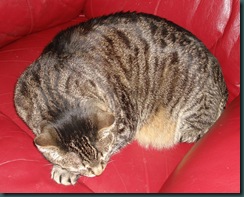 Many quilt bloggers are posting photos of their quilting accomplishments at this time of year.   Since I don't have much to brag about along those lines (sniff sniff), I decided to reminisce about something I have done a lot of in 2009!!!   I am an avid reader and really gave into it this year.    Reading, for me, is such escapism.   I didn't keep track of exactly how many books I completed during the year, but did keep a log of the ones I really liked on goodreads.
These are a few of my favorites (not in any particular order):

The Worst Hard Time by Timothy Egan chronicled various families during the Dust Bowl of the 30s.   Fascinating to read of all that we learned as a country during this trying time.

The Help by Kathryn Stockett was an engrossing read of life in the 60s South and how domestic help was being treated and a plan of one woman to expose it, even though it was a very dangerous idea.

What a walk down memory lane The Prize Winner of Defiance, Ohio by Terry Ryan was!  During my childhood days, advertising jingles were all the rage and people all over the country entered contests with their cutesy little ditties.   In the heroine's case in this book, though, it was survival to win money and prizes to keep her family afloat due to an alcoholic husband who tended to drink up his salary!  Very heartwarming.

A different way to think about history is always fun for me.   In The Physick Book of Deliverance Dane by Katherine Howe, the author posits "what if there really were witches in Salem in the 1600s???"    Very intriguing.

Over the Rainbeau by Schwartz, Hausman and Sabath was just sheer dreaminess for me.   My secret fantasy (I can hear my husband laughing at this one!!!!) is to raise goats and make my own goat cheese.  Lofty, huh?   In this book  Lisa Schwartz recalls her journey of leaving a job as a management consultant and becoming a goat farmer and cheesemaker.  Wonderful read about the trials, tribulations and rewards.

I loved reading about Julia Child's recollections of her life in France during mid-century.   I so want to go to France so this was right up my alley!    Her descriptions of Paris and other regions and her tough ride at the Cordon Bleu were so interesting.   My Life in France which Julia co-wrote with her husband's nephew, Alex Prudhomme, was one of the two books that the movie, "Julie and Julia", was based on.

Something kinda different, The Magician's Assistant by Ann Patchett, was a great reminder that life is not always what it seems to be.

While I wasn't as enthralled by Dan Brown's latest, The Lost Symbol as his DaVinci Code or Angels & Demons, I still enjoyed it very much and will anticipate the movie with good ol' Tom Hanks as the symbologist!!

Another depression-era tale (I sorta got obsessed with 'em and even re-read Grapes of Wrath) I adored this book of simpler times and making do.   Recalling her childhood in the harshness of 30s Iowa, the author brought to life what it was like growing up without modern conveniences yet still having a rich life.

The other book that the movie "Julie & Julia" was based on, Julie & Julia by Julie Powell, was just fantastic!  I was attracted to it initially because Powell was a blogger!   She had decided to make all the recipes in Child's book, Mastering the Art of French Cooking, and then blog about them--all in one year's time.  Ups and downs, marriage problems, career problems...all  a fun peek into someone else's life.

This one, recommended to me by my sis, was so touching.   Hotel at the Corner of Bitter and Sweet was a reminder of the injustices done to Japanese-Americans during World War II, with a beautiful love story woven in.

A few years ago I read Jeannette Wall's amazing story of overcoming an abusive and neglectful childhood, A Glass Castle, and still to this day haven't quite gotten it out of my mind.   When her new book, Half Broke Horses was released, I couldn't wait to get to Borders with my trusty coupon!   The book did not disappoint.  It chronicles Wall's grandmother who was way ahead of her time and was a pure example of the can-do spirit!

Just for something a little different, I read Freakonomics by Levitt & Dubner.   An entertaining view from an economist on how everything from cheating on tests to crack gangs' business dealings to the inner workings of the Ku Klux Klan are connected--incentives!    A good mind opener.
Looking for that next great book, KC Quilter.
Posted by KC Quilter at 7:57 AM 8 comments:

Snowed In And Frozen Up 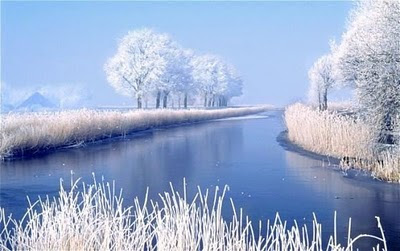 Here in good ol' KC we have been  hit really hard with snow and dangerous temps--as have many other parts of the country.   About the only thing to do is stay inside by the fire, read and drink lots of hot chocolate!!!   Oh, and think about sewing or crocheting!    I think it is high time I got into that sewing room and dug around for some UFOs that are wanting some attention.
I found this photo on the internet of the Platte River about 20 miles from my home.   Isn't it beautiful!  I think it has landscape quilt written all over it.
Posted by KC Quilter at 12:49 PM 7 comments:

KC Quilter
I am so glad you stopped by! Won't you please leave a comment?